Ben Gunn without the cheese 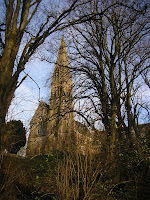 Well, that was quite a weekend! This photo of The Cathedral of The Isles, taken during Friday's lull in the frightful weather, gives no notion of the rattling slates, creaking roof timbers, guttering candles and flooded coastal roads that were to follow, nor of the fact that we would be stranded on Cumbrae by the storm and feel that by Sunday we were escaping by the skin of our teeth as we bumped across on the recently-restored Cumbrae ferry link which had been off earlier in the day. (We also had an interesting ride on the Western ferry from McInroy's point, travelling stern-first through the darkness as the sea washed down the length of the car deck, engulfing the cars at roof-height in a white-out of water and spray).

As for the weekend? We were there to sing in the Advent Carol service, and there were choristers stranded who had to be in London today (Monday), so we were not alone in our anxieties. But there was another sense in which we - four of us who've sung together in the cathedral since 1968 - were on our own, and that was in the experience stakes. By now, the rest of the choir seems to be made up largely of singers young enough to be our weans, and the result for me at least is a mix of smugness and irritation. Smugness because we've done it so often that we know exactly what's required, read like pros and don't wander off in mid-piece; irritation because we were surrounded by sopranos with the voices of angels and lowly sight-reading skills and an operatic bass who had never sung in a choir before and who tended not to watch the conductor. I was quite ratty by the time the performance began (who? moi?), so the spiritual dimension was somewhat lacking, though I did manage to fit in a quiet afternoon of study (1st Samuel, anyone?) before the singing began.

I'm ratty again right now because I still can't post my photos as I want to, and lost a first version of this because of it. But there's the usual virtual Mars Bar for the first to spot the point of the title of this post.
Posted by Christine McIntosh at 1:06 PM