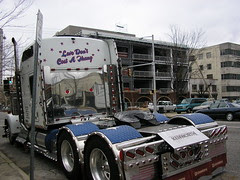 Spent a fascinating if chilly couple of hours inspecting the renovation of inner-city buildings in Birmingham this morning, in the company of a group of University students - I don't know if they were all at the same stage in their course, but the young man I spoke to informed me he was a sophomore (second year). We heard from an architect how his firm are renovating an old building (it was a younger building than the one I live in, but there you are - ancient relics all).

However, the main impression from the morning was how quiet the city streets are. The cars swish along, the odd truck passes (and the trucks are superb, in a terrifying, butch sort of way) - but there are so few people. The reason for this is apparently the proliferation of out-of-town malls, so that whereas in Glasgow or London there are shops and cafes and swarms of people, here there are wide, empty streets with the wind blowing down them and only a few figures passing - and some of them are "street people". I saw only one row of retail outlets, and a couple of cafes.

The effect is disturbing. There are huge buildings which in the past were banks or office buildings and which now lie empty, or are to be transformed into condominiums. The University buildings cover a vast area, and there are wonderful hospitals, libraries, arts centres and churches. The jail sits, rather macabrely, in the middle of town. (It has very narrow horizontal windows) There are many wide open spaces - this is not a crowded city. But I hope the people who eventually move into the loft apartments and the converted tower blocks get some shops - and some nice wee cafes.

I have a hope of being able to upload some photos tomorrow - there is a man with a Mac who has kindly offered his assistance. On quite another tack, I have to tell a disbelieving public that I have been going to bed insanely early - 10.15pm last night - and getting up at 6am. It's the American way, of course, but I don't expect it to survive my recovery from jet lag!


Update: As you will see, I've managed to upload a few photos. You can see the others over at flickr
Posted by Christine McIntosh at 12:43 AM