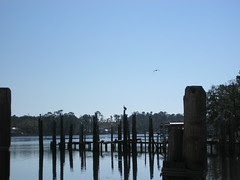 Just back from Mobile Bay - a brief stop in Birmingham before we head west to California. So many impressions that I know I must record before they're submerged in the next batch. So here goes for a patchwork of impressions from Fairhope:

Three days of brilliant sunshine and one of leaden skies and rain that became torrential as darkness fell. And under this huge, blue sky not one solar panel to power the electric climate control systems whirring outside every house. The sound of rain drumming on blue tin roofs. Storm drains lined with unromantic concrete, reminding us that things could be less than calm. Pelicans hunched in flight and on top of piers, and tall herons stalking along the bay margins. Bright red sparrow-sized Cardinals flying across the road.

On a more human scale, the wonderfully friendly service in shops, diners, cafes - and soda fountains and soda jerks straight out of a '50s movie. And in this same drugstore the old-timers in white trainers, and the instant transformation of an unremarkable pensioner into an unmistakeable American when he put on his baseball cap. High rise condominiums and hotels along the Gulf coast, their only concession to the possiblilty of hurricanes the stilts on which they stand, and in between them the still-uncleared debris from Katrina. And in front of them a miraculously white beach, miles and miles of sand so fine that it creaks beneath the feet the way snow does. I walked on this sand in my bare feet - and paddled in the Gulf - just because it was there, really. Irresistible. 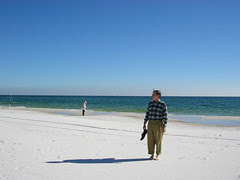 Whole malls of bleak outlet stores which make Swindon seem like a village. Vast quantities of remedies on sale for every imaginable ailment - laxatives, pain relief (no paracetamol!), blood-testing kits, crutches - a hypochondriac's paradise. Huge bottles of sauce and cold tea, but the devil's own job to find a decent coffee. (Today I found an espresso bar where the girl was incredulous that I wanted only "a shot" - and then revealed that she thought she was the only person alive who drank coffee that way)

But I have maundered enough. The photos I will add when I am home - the hunt for compatible equipment takes up too much mental energy. Today I have experienced a whole range of weather, from a walk beside Mobile Bay in the teeth of a wind that blew white horses on the waves under a leaden sky that reminded me of home, to sitting in the bright sun two hours later on the end of a pier with the towers of Mobile gleaming on the horizon, to a freezing evening in Birmingham where the temperature is 32 degrees F under a clear sky. This is a huge country, and tomorrow I shall be flying over the rest of its width.

Note: updated with photos now that I'm home - apologies to anyone using a feed reader!
Posted by Christine McIntosh at 2:54 AM