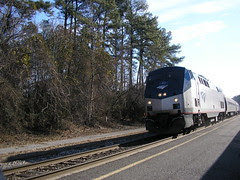 It’s time to start blogging again – I’m tired of unpacking and laundering and catching up with mail and trying to remember who I am and who I know …. The curse of being away for a month!

So where to start? I realise I’ve already done quite a bit on the Alabama experience, and I realise that there’s more on my other stops than I had thought, so I’ll start where I left off, about to leave Virginia for New York. By train – Amtrak – just for a change.

We’re on the platform of Williamsburg station. All very small-town and agreeable, as maybe half a dozen people turn up and wait at intervals down the platform. It’s sunny and freezing cold at nine-thirty in the morning, and we avoid standing in the shadows. Marcia asks a young man if he’s a Business Class passenger (we’re travelling Business as it’s a seven hour journey and any bloody fool can be uncomfortable, as my father used to say). Anyway, he is, and we’re standing in the right place and when the train pulls in jolly men throw the Suitcase from Hell (mine) and the new one from Macy’s up into the compartment and off we go.

We travel for ever through frozen swamps and rotting trees – I hadn’t realised so much of coastal Virginia was swampland – and every time we go over a level crossing we hoot in a traditional sort of way and I feel I’m in a black and white movie. The young man from the platform, who turns out to be a Washington lobbyist and speaks just like the guys in The West Wing, comes down the carriage to tell us what to look out for, so that at the appropriate time we see the Capitol, the Washington Memorial and two of the President’s three helicopters, which sit near the line at a Marine base called Quantico. We are duly impressed.

The conductor encourages us with little messages: We’ve had a message, folks. We’re going to be travelling pretty slow, ‘cos there’s work on the line. You gotta go slow, just like when there are road works. We do apologise and thank you for your patience. Or better still: We shall be continuing momentarily. I suppress a vision of stop-start motion. It’s better than a plane taking off momentarily.

The Potomac River is frozen over, and in a station I see that the taps on standpipes have been left running gently, so that huge icebergs form under them. The conductor informs us that we can get off and have a smoke, if we like, but warns that the temperature outside is significantly lower than when you boarded. We’re glad we don’t smoke. Later we pass through rows of Coronation Street-type houses which are a far cry from the places we’ve been. Baltimore slums, I think.

We dive into a long tunnel and emerge in Penn Station, New York. Somehow we drag our burdens onto the platform, which is on a level with the carriage. (In Williamsburg they had to provide a wee yellow step for us.) Eventually we locate a lift – sorry: elevator. It does not, however, go as far as the street, and we end up perched precariously on an escalator in the rush hour. We manage not to fall back down again, and find ourselves on the street. I eyeball the driver of a yellow cab and he cracks his boot – sorry: trunk – for us. I eyeball him again and he gets out to help. We scoosh off through the frantic streets. We think we know roughly which way we should be heading, but the one-way system soon puts paid to that. We surrender to our fate. We’re in New York.
Posted by Christine McIntosh at 6:04 PM