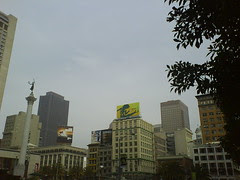 Blogging from Williamsburg, Virginia, I'm feeling a touch of the Evita syndrome again - another suitcase in another hall - as I look out at trees and a frozen lake instead of the bustle of Union Square, San Francisco (pictured). California remained mild and sunny until Tuesday; they desperately need the rain that began on Wednesday afternoon so I won't begrudge them. At the moment I'm so stuffed with memories that they won't download, so I'll just go with the moment and catch up when I'm home.

The vastness of the country continues to amaze - and the realisation yesterday as we flew from SF to Atlanta and then on to here that we'd covered in a day what it took the first settlers months - or was it years? - to accomplish. And as we approached Newport News Airport we could see the line of the Atlantic coast and the darkness of the river and the inlets of this complicated area and thought of the colonial era, and the Civil War, and Independence ... and were so pleased to see our old friends Peter and Marcia waiting in the airport, and to feel instantly at home. Apparently the Queen and assorted Royals are to be here in May for the 400th anniversary of this settlement - but we're here ahead of them.

I've put a few photos on Flickr, taken on my phone. Most of the camera pix are on a card hidden in the depths of my luggage and will have to wait till I have my own set-up to deal with them. Today we're off to look at Colonial Williamsburg and to buy our train tickets for Monday. The sun is shining, the lake is frozen and there are squirrels in the trees. Mr B is playing on one of two grand pianos and I'm playing on Marcia's new iMac. What more could a body ask for?
Posted by Christine McIntosh at 3:31 PM