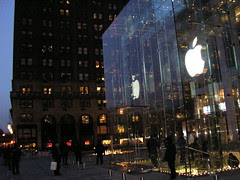 Wow. Almost too iconic to take in; almost too familiar to believe. Three days spent feeling I’m in a movie, but aware because of the acute cold that this is for real. I see filming happening – indeed, we are moved on at the Rockefeller Centre because we mustn’t get in the way, and have to slither round to another entrance in the snow which has resisted the clean-up – an impressive operation which seems to continue long into the night, the huge piles of snow in the gutter ever harder to negotiate when we cross a road.

We stay in the Waldorf Astoria. The doorman is wearing a long black overcoat, and a fur hat over a fleece balaclava. The bellhop who brings our cases to the room is large and earnest and breaks a lightbulb while making way for our stuff. I ask if it will be possible to make the room any cooler, and he suggests “cracking a window”. We wonder, wildly, if this is his preferred method of ventilation, but discover he merely means to open it. (We do, later, and then have the devil’s own job closing it as an Arctic wind tosses the net curtains around us. In the morning, we see the wee notice begging us not to attempt this feat without help.) 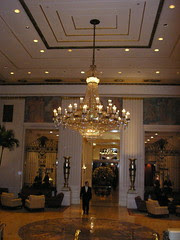 The hotel lobby is opulent, scented by a huge bowl of lilies, and full of business people networking, barking into cellphones or looking hopefully for someone. I throw a waiter into a frenzy by demanding soya milk with my breakfast, but it arrives, and is there for the asking for the rest of our stay. I tell the waiter he’s a star and he smiles sweetly every time we meet. It is so warm that I have to strip the moment we come in the door – and the lifts are so rapid that my ears are in a constant state of trepidation.

I decide I love New York. I take endless (and slightly squint) photos of skyscrapers, and travel the Staten Island ferry before the promised snow arrives. The Statue of Liberty seems strangely small, but arresting nonetheless. Frozen from the ride, we brave the subway once more and emerge unscathed in the wonderful Grand Central Station, where we eat among thousands, sitting up at a bar. I take photos of steam rising from the streets – another iconic phenomenon. We march half the length of Central Park to visit the Metropolitan Museum of Art – some well-kent paintings and a display of old musical instruments, among which an Erard grand which features in the book I’m reading (The Piano Tuner, by Daniel Mason).

On our way home we are seduced by the gleaming cube of the Apple Centre on Fifth Avenue, and after Mr B has attacked the door with his head (they shouldn’t clean them so assiduously) I buy a mini GDrive to back up my life. Much cheapness for travelling Brits these days. We eat out that night in a jolly Italian place under the Met Life building, and emerge to the first flakes of snow. We reflect that upstate New York has already vanished under several feet of the stuff, and wonder if we shall ever be able to leave.
Posted by Christine McIntosh at 12:29 PM