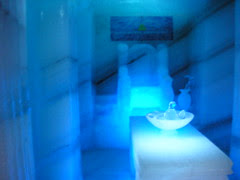 Ice Palace sans flash
Originally uploaded by goforchris.
Well, that was our summer holiday! Actually we did have some summery weather for the first half of the week, but as we enjoyed a game of table tennis on the Monday evening before dinner, we were warned that a change was coming - and it did. And now we're home, and discover that although it's been warm - well, mild anyway - it's also been unrelievedly dreich in our Heimat and sinister rings of toadstools bear witness to the humidity and lack of sun.

The photo here, however, is of the Dachstein Ice Palace, carved out by five famous Chinese ice carvers 8 metres below the surface of the Dachstein Glacier. Interestingly, the Dachstein is less affected by melting than other glaciers because of its position, and is listed as UNESCO world and cultural heritage. I personally would also list the Ice Palace as one of the more lethal places I've visited: as I took this photo - my second attempt, as I felt the flash version destroyed the impact - I was slithering irresistibly down the sloping corridor to the accompaniment of sinister electronic music and the muffled sounds of my companions as they vanished down the tunnel. I managed - just - to be fascinated by the patterns in the ice - these apparently marble stripes are presumably streaks of morainic material in the layers of ice.

Maybe they don't have the same attention to Health and Safety in Austria. Maybe they all ski and regard glassy ice as their natural habitat. Or maybe they take broken bones in their stride and never sue. Whatever the situation, I knew within seconds of embarking on this tour that I'd be focussed almost exclusively on my feet. Oh, and I did allow myself to think about the weight of ice above my head. And the fact that it was ... dripping. But I didn't dwell on it.
Posted by Christine McIntosh at 6:58 PM