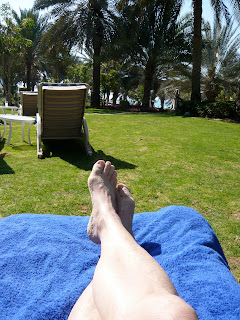 Why are you going there? they said. Dubai's a horrible place, someone else informed me. Never mind the oddity of telling someone that when they've just told you they've booked a holiday there - how sweeping a statement, and how ignorant of the possibilities that exist alongside the world's biggest shopping mall (we didn't even see it) and the enormous but rather inefficient airport. We went there, we stayed five nights which gave us four complete days, and I feel like a new woman.

I chose the picture on the left to sum up part of what was so good. The hotel had a lovely garden, full of pert birds that sang beautifully and were very tame, and there were comfortable loungers scattered throughout it. There were large, soft blue towels. When you had been on your lounger for a short while, a waiter - in a cricket hat and cream/fawn uniform, including trainers, would come over and offer to get you ... anything, really. We tended to opt for tea, green or peppermint.  We were easy pleased. And it was warm, warm like a perfect summer day in Scotland - hot, high sun, but a cool air which meant we could enjoy it for long enough to read, sleep, chat. I suppose it was about 24ºC in the first part of the afternoon. We both swam in the sea - though to be honest, it was so exhilaratingly bouncy that we tended to surf the waves rather than swim. The sea was also a bit Scottish summer - not warm, not the way it is when it's 40º on the beach - and had the same bracing effect. I loved it.

We were asked when we came home if we'd been able to wear swimsuits. Around the hotel, all we were asked in this Muslim country was that we wore a minimum of shirts and shorts - so we were spared the sight of fat men in semmits. On the beach, anything went, from the full cover-up of the black-clad women to the smallest bikinis and trunks.

What else did I love, other than the conditions that allowed me to relax so completely? One of the striking things about the hotel was the way the staff made a huge, international hotel feel like a bed and breakfast - because they were so friendly, so attentive, so ready to help, so smiling and cheerful even at the end of what must have been a long day. One of the waiters, a boy from Goa, told us that his name, Frezer, did indeed, somewhere in his family story,  have the Scottish connection that the sound if not the spelling suggested. I have to say I could get used to having someone anticipate my every whim - and even to being called "madame" at every turn. I guess that's what you pay for in the better hotel chains - the predictably good service and pleasant surroundings. The food was wonderful too - we never ate lunch as the breakfast buffet was amazing. 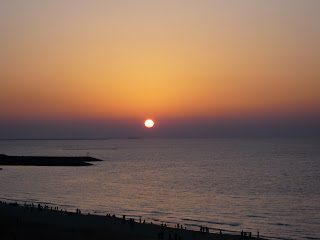 The hotel was right on a wonderful beach - Jumeirah Beach - and our balcony faced the sunset. In the pic on the right you can see the black shapes of the people who seemed to congregate there in the evening just to stand and watch as the sun dived towards the line of the Arabian Gulf. We walked along that beach in the mornings - it took about 90 minutes to walk to the end and back - collecting shells and watching sky-divers drifting down to land. It was spotlessly clean and felt somehow calm. I had wondered if I would be bored, but never got near boredom. I loved it.

Conspicuous consumption, a holiday like this? Well, no, not really. We could easily have gone much further upmarket on The Palm, for instance. Yes, it was an expensive four days, but it was a real holiday from greyness, cold, wet, winds, sinus infections, dark mornings and early nights, endless huvtaes. I will post more about things I saw and thought and learned, but this post is just to say it was worth every penny and I loved it.
Posted by Christine McIntosh at 6:08 PM