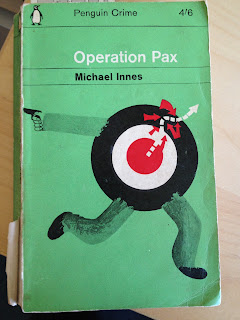 Back at the old paperbacks again - my third Michael Innes in three weeks,  a reversion to almost-childhood with one of my favourites, Operation Pax. And before that, although I read a new book in between, I re-read Hare Sitting Up. I could remember very little of the latter; but the former - as its dog-eared appearance testifies - is another matter. Strangely, although I could remember whole chunks of the narrative, the outcome of the plot eluded me once again until I was nearing the end and began to pick up the clues that the incisive Sir John Appleby was noting.

You don't really read these books for the detection. I never did - I loved instead the frequently baroque plots and poised prose - even when I was 18, as I know I acquired this copy when it was newly out. It was the summer holidays before I began university, and I can't help wondering now if the Oxford-based setting of the plot gave me romantic illusions about the next three years.

The story is fantastical, rooted in its time (the early '50s) with ex-forces undergraduates and biological warfare to the fore. Innes recreates the language, the society and the preoccupations of the day in his books - so reading them 60 years after they were written brings a familiar echo to someone my age. (I'd be fascinated to know how a 30-something feels about them - chaps? got a moment?) And he is a master of the telling impression - the figure seen out of the corner of an eye, the sense of danger conjured up by a fleeting footstep, the shadow in the Oxford mists.  He is also the master of the literary nod: in Operation Pax the central character of the first section is Kenneth Graham's Toad if ever anyone was.

I shall doubtless soon return to modern fiction, give up the re-reading for new paths. But I have a journey coming up, the small Penguins beckon, and I feel self-indulgent and idle.