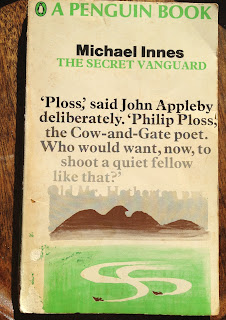 There are times when the brain shrinks and all one needs is the soothing assurance of a good friend - like, for instance, when one has a beastly cold and wants only to sit in the sun and read without being disturbed in body or in spirit. That's why I have been back at the shelves in my bedroom bookcase, the one with the neat shelves that will only hold old paperbacks (I've discussed such books before, yes?) The illustration is of my own copy of Michael Innes' The Secret Vanguard - you'll not find that on Amazon, I think, though there is a more modern printing out there - one dating from the late 1960s. The book itself was written in the early 1940s, a slim thriller rather than a detective novel, and a close relation of Buchan's The Thirty-Nine Steps.

I have been a devotee of the Buchan since before I was ten - I can picture myself reading it in the house we left in my eleventh year - and in the last few years of teaching English I read it aloud to a barely-literate class who sat with the books open in front of them: one of them sighed as we reached the end and told me, in all seriousness, That was the best book I've ever read. The Secret Vanguard is a rather more sophisticated take on the same themes of pursuit, betrayal, patriotism and looming war, and it is the sophistication of the writing that I love. As Sheila Grant, the heroine, is pursued through the Highlands by unknown foes to whom she gives wonderfully insane nicknames, the twists of the plot take place with minimal preparation: a supposed ally is suddenly a foe because he has chosen the wrong photo of himself; a haven becomes a den of villains when she reads its name upside-down on a piece of writing-paper. Innes never beats us about the head with his plot; we are expected to keep our wits about us and our inner eyes open wide to see what he is describing; we hear the tones of his educated protagonists and the mistakes made by those for whom English is a foreign language. And we never, ever, feel that the author will let us down with some clumsy over-explanation.

In many respects this is a silly book - there is no real development of character, no growth, no hidden message to send us off thoughtful. What it does do is provide the delight of impeccable prose, the absurdity of characters planted in unlikely situations, and the threat concealed under the call of a distant bird. If you've never read any Innes, this wouldn't be a bad place to start.

And then there will be so many further delights to look forward to...

*The Wikipedia entry for J.I.M. Stewart (Michael Innes) lists all his books as well as the information that he shared my birthday. I never knew that.
Posted by Christine McIntosh at 6:18 PM