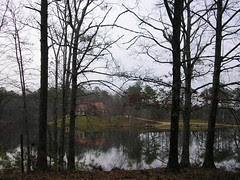 Yesterday had a glimpse of rural Alabama, courtesy of my hereto virtual friend Walter. (I don't think a 10 minute meeting several years ago counts against that description) I also had my first ride in a Cadillac, in which we swept through small communities with names like Leeds. Few fences, the odd dog driven to frenzies of excitement by our passing, tall forests of wonderfully mixed trees - dogwood, Scots pine, oak trees - and tiny stores and gas stations in what felt like the middle of nowhere.

The house, when we crunched up the winding gravel drive (winding to spare the dogwood trees, apparently), turned out to be a wonderful chateau in miniature, with tall shuttered windows, balconies of wrought iron, and a terrace with chairs which didn't invite in the chilly light of yesterday. The entrance hall just begged for a string quartet to play in its domed acoustics, and there was a lemon tree in a pot with the largest lemon I've ever seen ripe in the middle of it.

And then there was "the pond". If someone says "pond" to me I think of something circular, maybe 12 feet across, maybe a fountain. I do not think of a sizeable loch surrounded by forest with a boathouse just visible at the far end. This was the pond overlooked by almost every window in the house. As Walter fixed lunch (notice the creeping Arericanisms) I saw a heron - a blue heron - flap the length of the far shore, a wonderful red-headed woodpecker scuttling up a tree just outside, and the flash of the bluest blue imaginable as a bluebird swooped over the water and made me think of sopranoes singing "blue". (That's an esoteric reference for anyone who's sung with us!)

We had a wonderful day. We walked round the loch - Walter having left clues of tape to guide us among the trees - and negotiated the stepping stones over the burn. We enjoyed the best barbecued pork of my life - recipe for the crab-apple sauce, please, Walter!) and the warmest hospitality imaginable. At the end of the afternoon we were deposited back in Brimingham, a good 45 minutes' drive away. If you read this, Walter: thank you. We won't forget.

No photos, I'm afraid - I uploaded a few yesterday morning, but don't know when I'll have another chance.
Update: Photo now added to show Walter's "pond" , as well as the house.

Posted by Christine McIntosh at 2:09 PM