Binning the Bomb in Glasgow 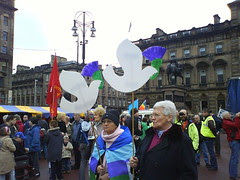 Slight change of tack today - I went on a demo, a protest march, a rally: whatever you call it, a goodly crowd assembled in George Square to march round the city centre on a dreich Saturday to make the point that it is a lousy idea to replace Trident missiles with the beta version - or whatever it is that you replace big bombs with. I last marched in Glasgow in the big "Not in our name" anti-war demo, and a fat lot of use it was too, but old habits die hard and you can always say you tried. (I just mistyped "tired" there; pretty appropriate in that the pace of your average march is about that of a stroll round an art gallery, and we all know how that affects the legs).

There was the usual mix of old people (like me, or older, even), school kids, students, anarchists (you can always tell an anarchist - black flag, black clothes, bit of drumming, wee dance, veggie food) clergy, church groups, a man with a Rottweiler, trades union people - and a host of Nationalists with saltires. I overheard an interesting snippet of conversation behind me about the connection between the peace movement and gay solidarity, and remarked the poverty of the song repertoire - I'm sure we sang better songs in the early 80s.

Some of the speakers were excellent. I was pleased that the Moderator of the Kirk and Cardinal O'Brien spoke, and delighted to hear Bruce Kent again, totally undiminished since I last heard him many years ago. He and Alec Salmond really have the popular touch - I love a good rabble-rousing speech. We clapped and cheered as the rain poured down - the benefit of being in a crowd is that it keeps your legs dry - and left when the pangs of hunger grew too strong to be ignored.

There were many police around - including a couple on bicycles - but everyone was terribly well behaved and all they had to do was hold up the traffic. (I think: I've not heard any news reports yet.) I wonder what will happen if the present government insist on lumbering us with newer and shinier missiles; I wish they wouldn't.
Posted by Christine McIntosh at 6:08 PM