Rubbernecking on the Rock 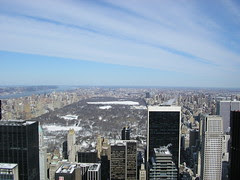 The last day of our American odyssey is brilliantly sunny, if still Arctic. The snow still gleams in piles, contrasting with the Demerara sugar that the slush has become. I take a picture of it to remind me of the city snow of my youth. Our cases are packed for the last time – by now, I am so heartily sick of the garments I brought with me that I wonder if I shall ever wear them again. Packing for such variations in temperature and social activity has severely restricted the variety of any one genre – though I doubt if you can have genres of clothing. We park our bags in the basement of the Waldorf, check out, and head out for a final spot of rubbernecking.

Actually “rubbernecking” is a misnomer, for we take the chance of a fine morning to be whisked to the top of the Rockefeller Centre – “Top of the Rock”, it’s called – in a terrifying lift which renders me deaf almost immediately and which has a transparent ceiling through which we can see exactly how high we’re going picked out in blue lighting. We avoid a shoal of squealing school kids and their harassed teacher (he loos far too old still to be doing this) and emerge on the top platform to an amazing perspective on Manhattan. (My pics on flickr don’t really convey the impact, but I tried).

Come lunchtime we’re frozen – like being on a mountain-top, that was, in city clothes – and happy to cram into an Italian eatery near the ice-rink. Then back to the hotel to wait for the shuttle-bus, entertained as we freeze in the hotel loading area by the doorman, who has a tough way with errant yellow cab drivers. “You keep cool, d’you hear? You keep cool and you do what I say in hear, or you’ll not get back. Geddit?” Vague jabberings from the victim of his wrath suggest a recent American, possibly from the Indian subcontinent. Our bus is late. We are not surprised.

Actually we are the first to be picked up by the so-called Express Shuttle; I listen silently to the complaints of later passengers who seem to have been given a time 40 minutes earlier than us. Can this be a fringe benefit of the posh hotel? Our driver, another recent arrival, looks like Denzel Washington and has a neat way with one-way streets, forbidden right turns and the use of petrol stations and exit lanes to get ahead of the crush on the New Jersey Turnpike. We arrive at Newark airport exhilarated by such lawlessness, but are immediately cast down by the terrors of electronic check-in: for some reason I can’t get my passport to scan and have to ask for help. It works first time for a bearded man whom I assume to be an employee – he looks like anyone else but seems to know what he’s doing.

Three hours and a chocolate croissant later we are on the plane and it is over. We decide that the sun is well over the yard-arm and allow ourselves a G&T each. We are fat and bloated from too much food and too little exercise, but there will be time to address the flab when we’re back in the boondocks. We eat cardboard lasagne and wish we had chosen the chicken. The lights go out and we try in vain to sleep. I am assailed by restless legs and annoy all around me by wriggling incessantly. After two hours they bring round breakfast and a dim Ireland appears below us. The clouds thicken and we know we are home.
Posted by Christine McIntosh at 11:13 PM