The birds have flown .. 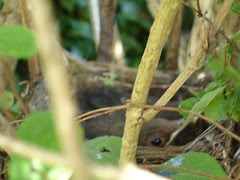 Blackbird chick
Originally uploaded by Mac44.
High drama in the garden. Yesterday John took this photo - very, very carefully, pretending to be doing something else, no flash - in which you can just see the black eye of the blackbird chick nearest the front of the nest. The other was neatly spooned in behind it - they were getting too big for their accomodation, I imagine.

And this morning the nest was empty. No flutterings and squeakings, no coming and going every five minutes as both parents worked to keep the food supply going. We'd just been remarking on the responsibility of having a nest out there, and now I was picturing Albertz on an early marauding raid, chicks thrown out by a contemptuous paw ... and then I saw the male, anxiously watching from the hedge on the other side of the garden, and below him one of the chicks, sitting in the grass. Later it had gone. Have they learned to fly? Or was this the first time, landing only feet from the nest? How long does it take a chick to be truly airborne? I hope they've made it to somewhere more secure.

Wherever they are, I'm feeling the empty nest syndrome all over again.
Posted by Christine McIntosh at 1:09 PM