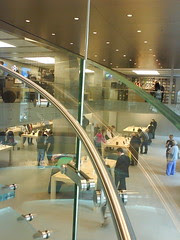 Apple Heaven 2
Originally uploaded by goforchris.
Paid a quick visit to the new Apple mecca in Glasgow today - after walking past it not once but twice! Somehow we failed to notice the big white apple above the doorway. Perhaps it was because in this magnificent building the portico itself is so imposing that the apple seemed merely an addition, perhaps merely because we were blethering - well, what do you expect?

Anyway, it's a lovely space, and this is a much better use for it than the previous occupancy - all candles and kitsch tat. It was delightfully peaceful - more black T-shirts than customers - although I was told that last night it was full of screaming girls and a live band. I had a poke round what is promised for the new OS (coming in October) and told a T shirt I'd be back for it.

And I will.
Posted by Christine McIntosh at 11:39 PM