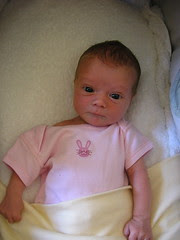 Beautiful, no?
Originally uploaded by goforchris.
Yesterday I was grandmothering again. I fear it may become a habit – for it’s very addictive! A look at the photo here should explain all … Up at 5am, off on the 7am ferry (thus neatly avoiding Cowal Games), we had time to shop for such varied items as olives, strawberries and cot sheets before arriving in time for coffee in Leith. And so it was after a very long day indeed that I found myself postponing our departure to have one final cuddle – and ended up singing a lullaby as I lay on the sofa with the baby lying on my diaphragm. What this did for my singing I don’t know, but it was obvious that the vibration as well as the sound had a soporific effect on Catriona. Actually I found it pretty soporific myself, and we left for home a full hour later than we had intended.

I have to note here that “soporific’ was one of my first long and wonderful words – do you recall the opening sentence of The Flopsy Bunnies? (“Lettuces are very soporific”, if you weren’t brought up on BP) But yesterday I was not really singing words, for the original words of the tune would have been in Gaelic. However, it seemed natural in all sorts of ways to sing the wonderful “Christ Child’s Lullaby” – the song Mr B has been working on of late for performance at Christmas in the Albert Hall.

I don’t think I sang lullabies to my own babies. Maybe I was too harassed the first time round; I certainly sang at Ewan, but it was because I had a performance coming up and had to get back in trim after he arrived rather later than anticipated. And so it was that the poor infant Edublogger had to put up with the alto solo from Britten’s “Rejoice in the Lamb" – the one about the valiant mouse. And soporific it was not.

Maybe that explains a lot …
Posted by Christine McIntosh at 10:40 PM