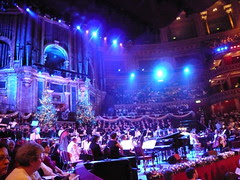 Second half
Originally uploaded by goforchris.
We've been off gadding, Mr B and I - to London, just before Christmas. Normally we wouldn't choose precisely this time for such a trip, but on Saturday evening an arrangement by Mr B of The Christ Child's Lullaby was being given an airing at one of the huge "come and join in" carol events sponsored by Raymond Gubbay and we felt it was too much to miss. A carol which was first sung in Dunoon by the late lamented Hesperians, re-emerged in Cumbrae at a carol service years later and caught the ear of Jonathan Cohen now appeared in an enlarged and revamped version sung by a large, miked-up group of theatre singers - in front of an audience of some 5, 000 in a packed Albert Hall.

What an evening! The atmosphere was terrific, the performances polished and glitzy. We joined in the singing and the Mexican waves - though it has to be said the latter grew somewhat tedious - and I was fascinated by the odd acoustics of the hall which made it feel as if I was the only person singing. Apparently this affects the performers too - one end of the choir unable to hear the other - and I was very aware of the huge size of the auditorium. But the evening was simply the greatest fun, with great waves of bonhomie all round. And it was nothing like anything I've ever experienced live before.

The journey home yesterday was long - our train north as well as the Gourock train seemed to stop at every lamppost - and ended with the bumpy last Cal Mac ferry and the unglamorous trail up Ferry Brae, dragging our cases up the hill in the teeth of the rising wind. We knew we were well and truly home when the rain began shortly after we got in. After the atmospherically chilly fog of London, it came as quite a rude reminder.

And now I'm off to sing with a crowd of maybe 40, if we're lucky - but I wouldn't miss our own brand of Christmas for anything. Not even the Albert Hall.
Posted by Christine McIntosh at 10:34 PM