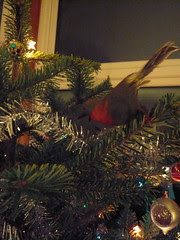 Robin ...
Originally uploaded by goforchris.
There is nothing, I've decided, more likely to bring about the folding of time, the telescoping of the past 12 months into - oh, I dunno: a week or something - than decorating the Christmas tree. I suppose it's because I still use many of the decorations I've had since the first tree of our married lives: the star I made from tinsel and wire because I realised too late that we didn't have one and now can't bear to replace, the fragile glass baubles that you can't buy any more (you can see my favourite in the bottom right corner of the photo). That robin, even, though I consider him a relative newcomer, actually came to roost when Neil was a small boy, and his little wire feet are decidedly twisted now. I haven't bought any new tinsel in ages because I don't like the furry brashness of the stuff on sale, and I was sad to note that a golden glittery tassel - one of a set of four - which I bought in 1972 has begun to unravel.

There is, however, one ritual in particular which makes time vanish. Every year, before I start draping them on the tree, I plug in the lights to check they're still working. They are. And it's a bit of a miracle, really. For they, dear readers, are even older than the glycerine I mentioned the other day. I bought them in 1970, little Pifco bells. They don't glare, they don't flicker in a migraine-inducing ashion, and they're all different colours. And no, I don't leave them on when I'm not around.

Note: I don't really like doing the tree so early in the month, but the forest shop has a tendency to run out and leave you with the choice of a monster or a lopsided dwarf. And once it's here ...
Posted by Christine McIntosh at 8:51 PM