Cleaning up the past 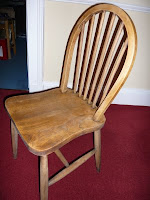 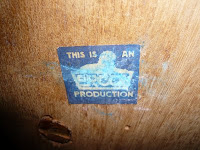 I've been indulging in a spot of heavy cleaning. Not, you understand, your regular housework, that being the preserve of Mr B, but the creative, nostalgic kind brought on by the need to clean up the chair in which one's granddaughter has been eating this past week. The chair in question is one of four kitchen chairs which belonged to my parents - and if you look carefully at the blue label in the second photo, you will see that they were made by Ercol. (I should admit now that the chalk scribbling on the label was done by me, aged, I imagine, about three.)
As my parents were married before the World War 2, I think of the chairs as being bought in the late '30s. I first remember them in the kitchen of a top flat in Novar Drive, Hyndland, where they sat round the square kitchen table next to the range. Until we left that flat in 1955 the range was in daily use - it heated the kitchen and the water, though I don't think my mother used it for cooking unless there was a power cut. In these days the coal lived in a bunker in the kitchen, so every time coal was delivered the dust would go everywhere. Notwithstanding this grime, it was on one of these chairs that a nurse sat to hold me as I was anaesthetised prior to having my tonsils removed; this operation took place on the kitchen table and I survived.

Because, presumably, both chairs and table were robust and not easily damaged, I played on and under them all through childhood. They were used as steps or climbing aids and stood in for the parts of an imaginary boat/spaceship/house. I don't think they were ever really cleaned other than by the swift removal of dust - unless the tonsil job brought on something more serious. The woodwork in the room was a deeply utilitarian green, and I found a small splodge of this paint on the seat today, along with a smear of the pale grey paint from its next home, also heated by solid fuel.

I keep going on about the coal because today's labours produced a soupy sludge of years of coal dust, soot and very, very old polish. If you look closely at the first photo, you can see the darker colour at the foot of the spars and on the legs - I really needed to be in a sunny garden with some sandpaper to do the best job. As it was, it took a great deal of effort with wood shampoo, an old pot scourer and some beeswax polish. Perhaps one day I'll take all four of them outside and give them a real going over.

It's funny how we can go into paroxysms if someone scratches a piece of furniture we've just bought, though - I realised today that I don't give a fig for the marks on these chairs. Maybe, of course, it's because I was originally responsible for them.

Try as I will, I cannot get this post to look right. That dangling "I've"... I give up. Life's too short.

Posted by Christine McIntosh at 6:19 PM