Of lethal decorations and other matters 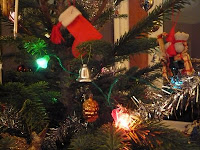 "Tis done. This photo is one for the archives, showing as it does our antique Pifco lights, still shining after 38 years. I note from the paper label still attached to the wire that they are "Empire made" - did we still have an empire in 1970? And even better: I found one last replacement bulb in the box, so we are not yet at the last gasp.

If you look closely, you will also see a small glass bauble shaped roughly - very roughly - like a pineapple. I have carefully bestowed this and the other five glass baubles high enough to be well out of the reach of any maurauding 16-month-old; all she will be able to reach are the ones made of what feels like outsize ping-pong balls. In fact, my tree looks almost exactly the same as it has done ever since 1970: the tree variety occasionally differs, and this is a 6 foot rather than a 5 foot one, but give or take a few new baubles I cannot resist getting out the wee santa on a cane horse (given to the kids, I believe, in the early 80s) and the wee silver bells which really ring ....

Enough already. It's up and decorated and there's water in the stand and the tinsel doesn't look like string on a parcel. I have my standards. Fussy? Never.
Posted by Christine McIntosh at 11:10 PM