A critical study of the rural road network in Wales ... 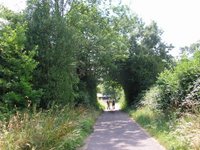 Living as I do in the wilds of Argyll, I'm fairly used to single-track roads. In fact, because I actually learned to drive here, I'm more at home on a tiny ribbon of road over a moor than I am on a motorway, where I find the rest of the population aggressive and unpleasant. (This may well be a subjective reaction. Nothing personal, then.)

Wales does scary single track roads. The photo gives some idea of the scale of the roads I mean, but I was in no position to leap out of the car to take photos of the really exciting ones where the high hedges crowd in on the tarmac and you can't see more than a few yards ahead. There is a network of these roads all over the border region - I never got much further; for all I know they're all over Wales - and we were driven around on them by our hosts as we visited the tiny churches of my other pix.

It was at the end of a long hot day when we had Our Big Adventure on a Small Road. We had embarked cautiously along a dark green tunnel under the trees, nettles brushing both sides of the car, when a car approached, firmly, from the opposite direction. Consternation: there was nothing remotely resembling a passing-place. They don't actually mark passing places anyway - you have to guess. So we reversed, squeezing past a group of walkers with a dog and sidling into the entrance to a field. The other car passed. The occupants waved, but grudgingly. We set off again.

We had progressed slightly further when it happened again. This time we tried negotiating with the other driver, but no: there was, she averred, absolutely nowhere behind her where two cars could pass - not for oh, a mile and a half. Like fools we believed her and did it all again, this time nearly squashing the dog. While we sat in our gateway not one but four cars passed, their drivers looking neither to left not to right - let alone acknowledging their good fortune.

We set off again. This time we tried a bit of speed. We passed the walkers, who cheered ironically. The trees thinned, the light grew, we passed at least two perfectly adequate passing places (so driver No. 2 simply couldn't reverse) - we were free! Greatly cheered we sped towards Hay on Wye. Thoughts of tea and buns formed unbidden. And then we caught up with the Tesco delivery van, and thought perhaps we could follow it all the way ....

Until it stopped. The reversing lights came on. I can't actually bear to tell this bit - in fact, I am unable to recollect it with any clarity at all because by this time I was giggling helplessly in the back seat and had infected both the driver and her husband. I don't think Mr Blethers was quite so affected - but then he's used to me. All I do remember is that we ended up in the only gateway for miles, our nose halfway into a bush, giggling like ninnies while the Tesco man reversed past us into the clutter of Range Rover and green car which were already behind us. His face was grim. The idiot pensioners (for that's how we must have appeared) sniggered all the way into Hay.

So spare a thought for people who have to drive as they work in the Black Mountains of Wales. And don't even think about going there on a hot summer Sunday. Stick to Argyll - there's no-one there.
Posted by Christine McIntosh at 1:05 PM