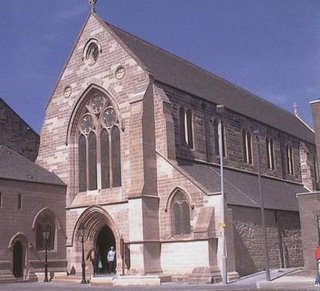 When you hear of a priest being instituted as Rector of a church these days, it ususally means he or she has just arrived there, is beginning a new job as it were. But today, my pal Kenny was instituted as Rector of St Augustine's, Dumbarton where he has been Priest-in-charge for the past 6 years or so. I wanted to be there for such a milestone on the journey of this congregation - a "cairn" on the path, as +Idris called it. It is no small achievement to complete such an ambitious restoration project and develop as a congregation during the process, but this lot have done it! I was welcomed like an old friend, invited to the buffet, talked to more people than I can remember, and had a ball. The service was full of warmth: this was not entirely down to the incredible physical warmth of the building, though it's a long time since I've been quite so cosy in an Episcopal church!

So well done, Kenny and well done St Aug's - you've done exceptional. And thank you for a great morning!
Posted by Christine McIntosh at 4:58 PM