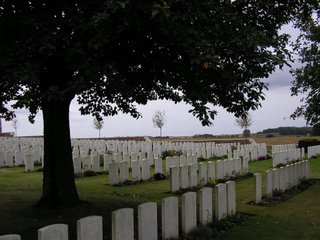 After the weekend of remembrance, both public spectacle and the much smaller scale of a tiny church observing the silence at the morning Eucharist, I read - belatedly: Sunday is always too busy for much dissecting of the papers - that Jon Snow, the newsreader, refused to wear a poppy to read the news. He referred to "poppy fascism". And I read about this in Muriel Gray's column, and discovered that she was as critical of his words and his action as she also seemed critical of the wearing of a white poppy.

Now, I'm as fascinated by the horrors of WW1 as anyone, and took the photo above on a visit to the battlefields of The Somme, when four of us walked in silence among the many graves and stood on the crackling white stubble of the fields where men had died. I felt my heart stop at the sight of a row of figures advancing over the fields with guns sloped at the ready - the shooting season had begun, but it was a strange wrinkle in time - and looked at the photos in a museum nearby of young men made old by horror. I stood in silence in church and felt moved at the sight of our old soldier carrying the poppy wreath out to the graveyard.

But I did not wear a poppy, and it's a long time since I did. Although now we no longer have to stand and sing "God save the Queen" in our church, there was a time when we did, and as a member of the choir I was expected to lead in this. I came in for a lot of flak when I wouldn't sing - I stood, but in silence - because I didn't think the eucharist a proper place for such nationalism. I felt, in fact, that my "remembrance" was being forced on me by people with a different agenda from my own. These same people pilloried my membership of CND and labelled me a communist for my activities at the Holy Loch - then a US naval base. I used to feel angry on Remembrance Sunday, and longed for a diplomatic illness to get me off the hook.

Now we seem to have moved on - all of us. The church seems to talk with a different voice, and a bishop washes the feet of peace marchers in Edinburgh. I thought in the silence of the young men and women dead in the muddle of our foreign adventures, and of the photo in The Guardian last Thursday of the children killed by Israeli shelling in Gaza. We heard a meditative sermon on the "stories" we tell of our experience - the way a country makes sense of its recent history, in a way - and wondered how this decade's "story" will end. The armies nowadays are professional soldiers, not frightened conscripts - but the children and women who die are conscripted merely by an accident of geography. How do we make their "story" anything but tragic?

Muriel Gray talked about people's "moral posturing". I daresay I'm one of the people she despises - religious, non-poppy-wearing switherer that I am. But I will not be conscripted into going along with everyone else just because it shows solidarity, for if I did I think I'd be pharisaical.

Freedom, after all, is what it's about. Isn't it?

Posted by Christine McIntosh at 3:03 PM