The shock of the new 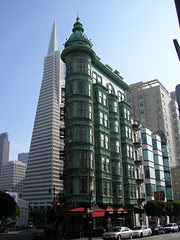 And another thing .... for I'm not done yet! I was looking over the posts I made "live" while in San Francisco, and realised that I didn't actually convey quite how intimidating we found that first experience of sallying forth into the hubbub of the early evening. Here we were - abandoned at the St Francis Hotel by our kind chauffeur and left, as darkness fell, with only the most rudimentary of ideas as to our location and an arrangement to meet up with someone I'd only met online but who seemed sure, over the phone, that we were within walking distance of her hotel. As the bellhop seemed to agree with this judgement, and gave us an idea of where we were heading, we plunged off down Market Street with only 15 minutes to find the Hyatt Regency and make the assignation.

We realised the next day that we'd been on the fringes of the Financial District, where the tallest buildings in the city are, but at the time we felt totally overwhelmed. I suppose it was the effect of finding ourselves there after the low-rise, laid-back feel of Santa Cruz and the contrast between the absurd Hyatt hotel (sort of a pyramid with the balconies on the inside) and the rural idyll of downtown Pescadero, where we'd had lunch - a look at the two photos will give you the idea. 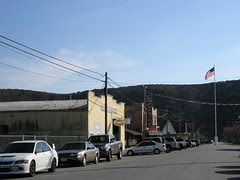 We were much more at ease after we'd met Anne, found the restaurant she'd had recommended, and gone back to her room to blog and record for her. But we did take the advice of the doorman (an extraordinarily Dickensian figure in a bowler hat, long black coat and white neckerchief) and take a cab home. Worth it, really - if only to have him pull out his whistle and make the cab appear like magic.

I could almost get used to living like that.
Posted by Christine McIntosh at 11:15 PM