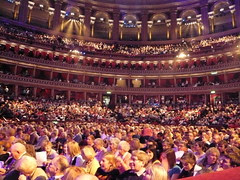 Audience
Originally uploaded by goforchris.
I've been reflecting on how it felt to sit in a famous venue like the Royal Albert Hall and hear Mr B's work performed to an audience of 5,000 (you can see a selection of them in the photo). I had my own small stake in the piece, having adapted the words of two of the verses from the translation of the Gaelic, so I too had my name announced before they sang. And yes, it was exciting - especially in anticipation - and yes, I felt proud.

But mostly, you know, it felt like any other gig. And I wonder if this is the point about this performance thing. If you do perform, an audience is an audience whether there are 50, 500 or 5,000 people in it, and it's important to perform well to them. The strange familiarity of having Jonathan out there doing the biz - instead of having him play for us on Cumbrae - had an effect on the novelty of the venue, and this was reinforced by the familiar ambiance of the somewhat spartan environment o the Artists' Bar at the end of the show.

So yes - it was a great evening, but the next audience will be, I think, every bit as important. Mind - it'd be a blast if 5,000 tried to squeeze into our wee church!
Posted by Christine McIntosh at 11:06 PM