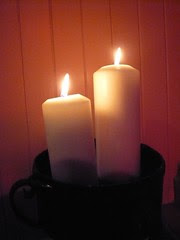 Candles
Originally uploaded by goforchris.
In a small, damp, chilly church at the foot of the glen, pestered for a spell by the noise of motor-bikes (until two of the congregation asked the bikers to desist), a bit of a miracle happened this afternoon. When you arrive for the Advent carol service and the vestry corridor is slippy with the rainwater dripping from the tower and your only bass has succumbed to a bug which has rendered him voiceless and the tenor can only wonder if his voice will survive the afternoon, you might be forgiven a moment's doubt. But as the people arrived, as the candles were lit, as the organ played the Liszt/Arcadelt Ave Maria ... it began. The magic. The anticipation that no setbacks could dampen.

As one of the singers, I tend to have a partial take on these events, in more than one sense of the word. I am quite capable of feeling satisfied if I sang well - never mind the rest. But today wasn't like that. As Mr B (at once the bass and the organist) was now behind the organ accompanying many of the pieces he would have sung in, we had to concentrate like crazy on his more distant conducting - but that didn't diminish anything. Maybe the heightened tension contributed to the atmosphere.

But a huge part of the magic came from the words today. For the first time, all the readings other than scripture came from members of the two congregations, four of us, women, writing about the experience of birth. As one of the writers, I have to say we were well served by some wonderful readers, and as a listener who had to sing immediately after these readings I must add that it was so emotional - I was so emotional - that singing seemed well nigh impossible.

But sing we did, and the effect of the whole was powerful and wonderful. And I can do no other than illustrate this post with two of Kimberly's candles - for if anyone does candles, it's Kimberly. Before we began this day, I was thinking about the intensity of preparation and the way it takes over our lives to the exclusion of much that most other people see as "normal" for this time of year. We haven't been for a night out, we barely have time to read a paper, it seems. And there is quite a degree of tension, and I catch myself wondering what it'd be like not to sing, not to be so involved. And tonight I know. It'd be ... nothing like this. And I wouldn't feel the way I do right now: intensely grateful, and exhilarated beyond reason.

Oh - and totally exhausted. Did I mention that?
Posted by Christine McIntosh at 6:57 PM