Brambles in the blogosphere? 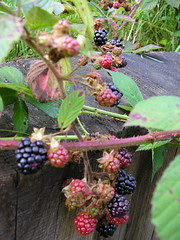 Brambles
Originally uploaded by goforchris.
I've just had the interesting experience of being interviewed for an embryonic local radio station - "someone creative" was apparently the remit. This resulted in an entirely enjoyable morning talking about my poetry and reading a few of them, including this one, which I wrote last year on National Poetry Day.

Today I found five brambles
Dangling carelessly on a branch
Miles from their roots
Invaders in my garden
Hard little things
Dull-eyed and gritty
But now I should wrestle
Not with a bank of weeds
But with an online bank
Prune some debts
Tidy loose ends
And instead of working
I am writing about brambles
Because a friend told me
That this was a day
For poems to grow in.

© C.M.M.
It feels somehow self-indulgent to be given the chance to talk about my own writing - normally it's something I do and offer without comment, as if it was bad enough to be inflicting the actual writing on folk without discussing it as well. In fact, a blog is about the only place where such self-absorption seems acceptable - until you start wondering about audience. I've touched on this before, here, but I've been forced to think again about audience and responsibility in blogging as in other areas of my life.

I find myself slightly resentful at the thought that a blog which began as my little-read online maunderings should have prompted someone to question the wisdom of posting what comes up my back. Is this what happens when people actually read what you write? You become anwerable?

Well, if so, I'm about to do some more serious (educational) thinking online. And if someone doesn't like it - tough. But I will think about what I write first. And that's a promise.
Posted by Christine McIntosh at 12:14 PM