Rubbernecking in a DUKW 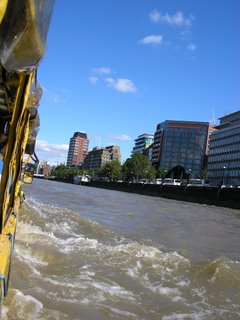 What fun we've had today - real tourist stuff. Probably the most eccentric was to go for a tour round central London on a DUKW - they don't call it that, they call it a "Duck tour", but I've seen these things being used by the army (they landed on Brodick beach in my childhood, but that's another story) and knew better. For the uninitiated, DUKW is explained thus:
D=First year of production code "D" is for 1942
U=Body style "U" utility truck (amphibious)
K=Front wheel drive. GMC still uses that on trucks today (K5 Chevy Blazer)
W=Two rear driving wheels (tandem axle)
The truly enthused can discover more here, but if I tell you that it drove around Trafalgar Square and other tourist sights and then plunged into the Thames beside the MI6 building, you'll get my drift. We did drift a bit, come to think of it - the tide was racing brownly and scarily upriver and chugging broadside on as we did at first was quite hair-raising. You'll see from the photo that we were quite close to the water - it looked so soupy that the thought of falling in was remarkably unattractive.

We trundled/scooshed (more scooshing) past several places which looked somehow expectant, waiting to hear when the PM was going to move on, so to speak. So it seemed fitting to complete the day with a tour of the Parliament buildings - a an oddly familiar place, actually, though it was my first visit. We followed the route to the Lords taken by HM the Queen when she goes to open Parliament, passing through halls of enormous splendour with a faint whiff of public school. I was glad to see that The Woolsack has a cunning back support provided for the Lord Chancellor (I used to worry about that. I shan't any more), and amused by the constant exhortations that we should not sit on either the red benches of the Lords or the green benches of the Commons. Instead, we huddled obediently on the steps and heard how Dennis Skinner always reserves his seat with a prayer ticket, which seems to be the Commons equivalent of a German's beach towel. Apparently turning up for prayers is the only way to be sure of your place. Interesting, the place of religion in today's society.

We saw the plinth reserved for Margaret Thatcher's bust, rather insensitively placed next to Edward Heath's, though apparently they can be moved around. The guide allowed herself a brief speculation as to where a certain T. Blair would end up, but at that moment I was more struck by the oddity of seeing busts of such familiar people - Harold Wilson and Jim Callaghan especially. And then we were outside again - no tea and buns because of renovation work in Westminster Hall. I realised too late that I hadn't visited the loo which the leaflet mentioned as being available - but then HM apparently has never used hers. Fifty-odd years of State Openings and never a visit.

An example to us all, I'd say.
Posted by Christine McIntosh at 5:54 PM