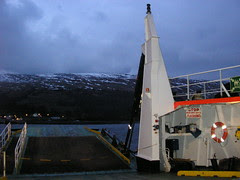 Car Ferry
Originally uploaded by goforchris.
I really must give up puns. But I feel compelled to strive to show some wit - even after a day spent driving round chilly Cowal. This trip was to Rothesay, in the interesting journey to acquire a new priest for our linked charges in Bute and Cowal. Even on a bitter evening, with wind-chill surely bringing the temperature below zero, there was beauty in the white-streaked hills contrasting with the red stripes on the Cal Mac ferry and the lowering dark sky. I don't know how it looked to our visitor, but I was glad I had my camera.

I usually post pictures of places online. Some people have a horror of the idea of their photo appearing on such a potentially public situation. But why? Is there a link to the primitive fear that somehow a photograph steals the soul? No such thought seemed to enter the mind of the man who demanded I take his picture - he was so insistent that I did take it, and you can see it on my flickr account. I doubt the subject will see it - and I wonder if he'd be pleased to know it was there. Would people who resent the invasion of their privacy represented by online publishing feel the same if their photo appeared randomly in a newspaper? Perhaps as background to a public figure, or in a random street shot? Or is it just the idea they don't like?

But now these ramblings much cease - partly because I have had a tot of a spectacularly good honey and brandy drink brought back from his travels by Edublogger and my fingers are no longer working in harmony with my thoughts. But I cannot leave without congratulating Walter and Duffy for their witty and erudite comments on yesterday's blog title. Where would a boring old blogger be without them?
Posted by Christine McIntosh at 10:54 PM