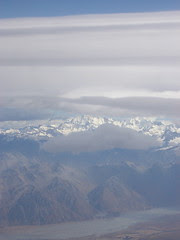 Mount Cook from the air
Originally uploaded by goforchris.
...hippity hop. Well, no - not much hopping after 37 hours of air travel. Much bouncing around the sky after taking off from Frankton - all these mountains make for interesting updraughts - but collected myself sufficiently to take a few pix.

And the rest of the journey? Well. The Indian Ocean is very big. So is Australia. And it was dark all the way across both - we landed in Sydney in a spectacular orange sunset and didn't see daylight again till we were leaving Dubai. That's about 16 hours of darkness, and they didn't fly past. There was a strange niff in the plane too - we fear one of our fellow-travellers either had travelled too far already or had unpleasant feet. Anyway, there was no escape. I'll not go into the details of the effect of this - except to say that much of the food they kept giving us went untouched.

The flight from Dubai to Glasgow was a joy. Bigger plane, less crowded, bright sunshine. In between bouts of drooling sleep, we were able to look down on Iran (big, dun-coloured, ridgey, lots of snow in the north), bits of the Caspian sea, the Crimea (yes - that's the Black Sea), Poland (still snowy) and a wee bit of Denmark (also snowy). Northern Europe strikes me as such a busy place after New Zealand - and after the deserted appearance of much of Iran too. The airport at Christchurch even seemed busy after the peace we've enjoyed.

Today it is raining in Dunoon. It feels cold. But there is much going on and in two hours we leave for Oban. Don't ask why. Just let's hope we don't fall into drooling sleep before we arrive.
Posted by Christine McIntosh at 1:31 PM