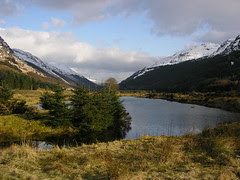 River Massan
Originally uploaded by goforchris.
We walked in Glen Massan today, and I was aware that I was looking at my surroundings as if I were new to them - the effect, I suppose, of having walked a new wilderness for a month. The colours were not unlike those of Central Otago - the grass is dead and yellow after the winter, and the snow was very white on the hilltops.

It was cold, and the road was very muddy - because someone has bought the glen and is creating a pond in front of the house, which in turn will be replaced by something bigger. There was a big, big lorry moving the soil from the pond hole and creating a mountain of earth across the track. Much mud indeed.

We await further development with interest. Meanwhile, my other pics can be seen, as usual, on flickr - just click on the nice one I chose for today.
Posted by Christine McIntosh at 6:36 PM