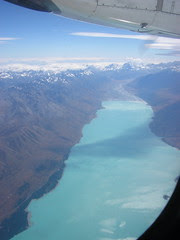 Lake Pukaki from plane
Originally uploaded by goforchris.
Ok, purists - I know this isn't a jet plane; it was some wee turbo-prop job with about four steps down to the ground and the wings obligingly above the fuselage so's we could see the view - but it's a lovely view and worth sharing. And I want to talk about the interesting effects of long-haul flying. If anyone out there has any explanation of the phenomenon, I'd be glad to hear from them ....

First off - it wasn't nearly so bad going out. We landed for the last time at teatime in NZ, and though we didn't really feel like tea, we had some and went to bed at quite a normal time. next afternoon, for about an hour, I felt very peculiar, but it passed and I put the slightly broken nights down to the heat and the unfamiliar bed.

But now ... well, much, much more pronounced symptoms. Apart from the stupor of my first night at home, I haven't had an unbroken night. I waken at 2am thinking it must be time to get up. I sleep shallowly, with silly dreams (last night a plane crashed on the coal pier, for instance, and the debris destroyed my roof). This morning I got up before 7am because it felt absurd to pretend to sleep when I could be doing something else. But come 3pm, I feel dizzy with exhaustion - as if, in fact, it was 4am. So far I haven't really given in to this - a trip to the supermarket was today's antidote. Hmmm.

It also interests me how after a month I'm unfamiliar with my own kitchen. I reach for things where they were in Edgar's instead of the places I've had them for years. And in the supermarket I was looking for the fabby orange juice that seemed stuffed with actual oranges. It wasn't there.

And I miss the sun. In fact, it's damned cold and miserable. I'm not used to it any more.

And it gets dark too early.
Posted by Christine McIntosh at 7:05 PM