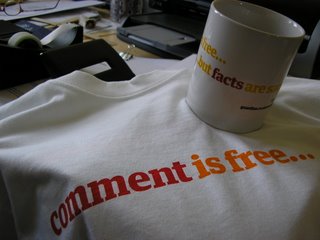 Couldn't resist using these neat Guardian goodies to illustrate today's maunderings: Comment is free....but facts are sacred. I've been looking at St Mark's gospel with a few mates, and yesterdays' session set me thinking - not just about the events leading up to that last passover meal, but also about the truthiness of the gospel story. (This is a new word for me - worth making the link to Wikipedia to find out).

When we began discussing, for example, the woman with the alabaster jar of precious ointment, we found in her various symbols. There was the undoubted truth of a woman's emotional reaction to the person of Jesus - and the women present related to that. But when we considered that the cost of the ointment probably amounted to the basic stipend for a year, it raised immediate questions of what we were doing paying a priest instead of "giving to the poor". And as for Judas - after realising that Judas was probably us, we began to wonder if he was a real person in the factual sense of the word, and was instead a purely symbolic - and enormously important - figure.

So: comment is free - and that, I suppose, it what we were doing. But facts? I suppose I've always felt, in adult thought at least, that the incredibly familiar bible stories were not facts quite as the Guardian would report them - because the Guardian's reporters file their stories immediately after - or even during - an event, not decades later. They would confirm their facts, even in a feature covering, say, the Second World War. By modern journalistic standards, the gospel stories would qualify as ancient morality case studies.

But golly, do they inspire comment! In recent weeks I've been reading the Psalms, and had reached the notion that they were a bit like blogs, reflecting the moods and the hopes of the blogger/psalmist. The gospels, once we get away from the "yeah, yeah, I know this bit" approach, can produce a torrent of comment to match those on the new Guardian super-blog

People are still wary of blogs, especially church people. And too many people - inside and outwith the church - are wary of actually commenting on the Bible. But is ignorance ever a good excuse?

Posted by Christine McIntosh at 7:05 PM